There are 20 million women in America who suffer from excessive hair loss. Ten million of them are under the age of 40. While it’s common to see and hear about mens hair loss, women’s hair loss is seldom mentioned. It’s almost as if society doesn’t want to admit that such a condition exists. So let’s define the issue and it’s causes, as well as explore some of the solutions available. 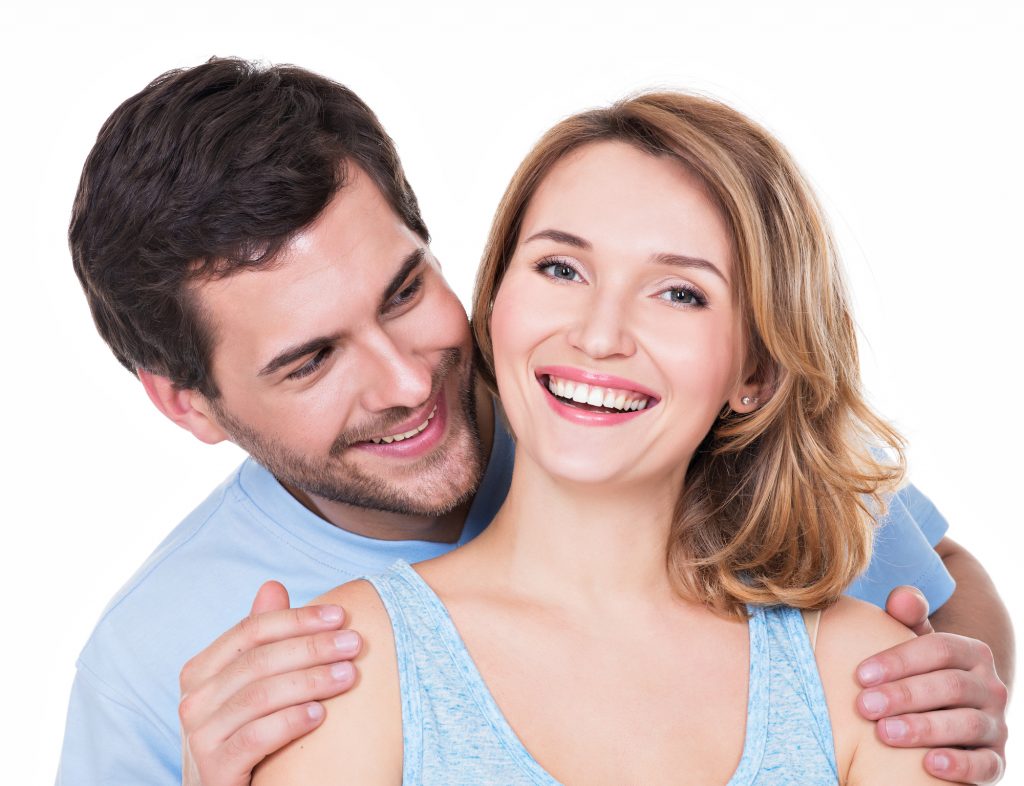 What is “excessive hair loss”?

All people – both men and women – lose hair. It’s a natural occurrence. An average person loses 15 to 40 hairs each and every day.

Human hair goes through three growth cycles. The “Anagen Phase” is when hair grows. This cycle lasts between three and five years. The second phase is called the “Catagen Phase”. During this time, hair growth ceases and no pigment is is produced for about 14 days. The Catagen phase is followed by the “Tologen Phase”, when hair is shed. This cycle can last around three months. 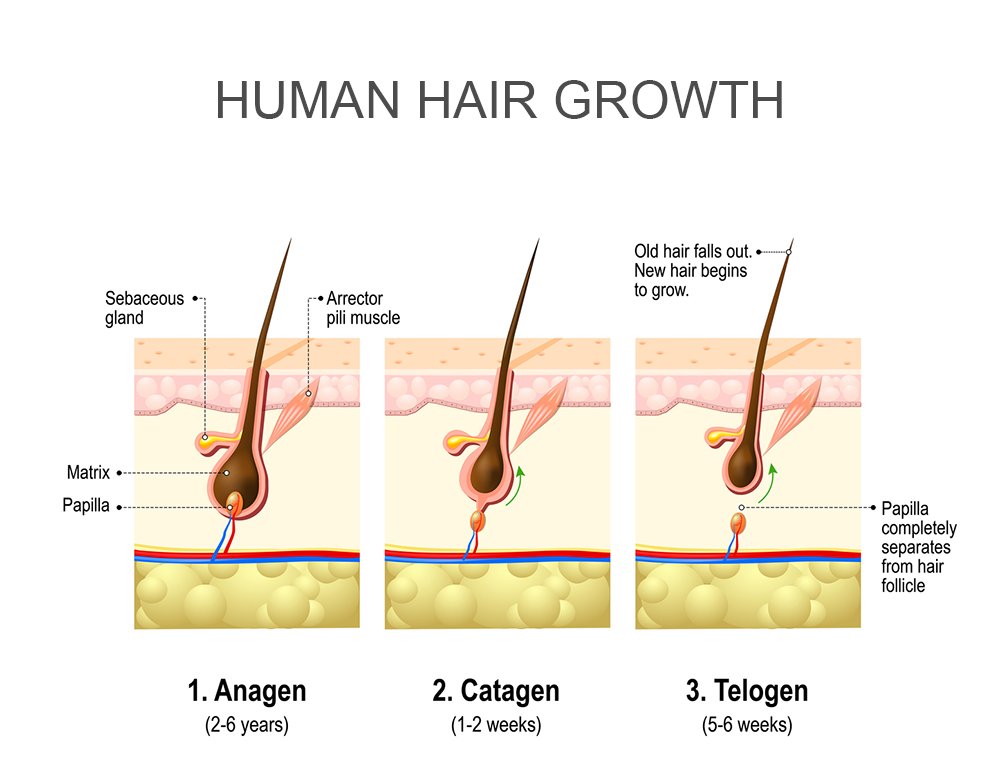 In individuals with healthy follicles, about 90% of the hair on the scalp grows at one time. Because the vast majority of the follicles are in the Anagen phase – and only a small percentage of them are in the Telogen phase – a normal amount of hair fallout isn’t noticeable.

The overwhelming majority of women suffer from what is known as androgenetic hair loss. This is caused by hormones.

When a hair follicle is unhealthy, the hair growth cycles are suspended and the follicle stays in the Telogen phase for an indefinite period. As more and more follicles stay in the Telogen phase, less new hair is being produced. This results in thinning hair, and ultimately, hair loss and balding.

How long do afflicted follicles stay in the Telogen stage? In many cases, forever; in some cases, hair production resumes. The determining factor is what condition caused the follicles to stop producing hair in the first place. 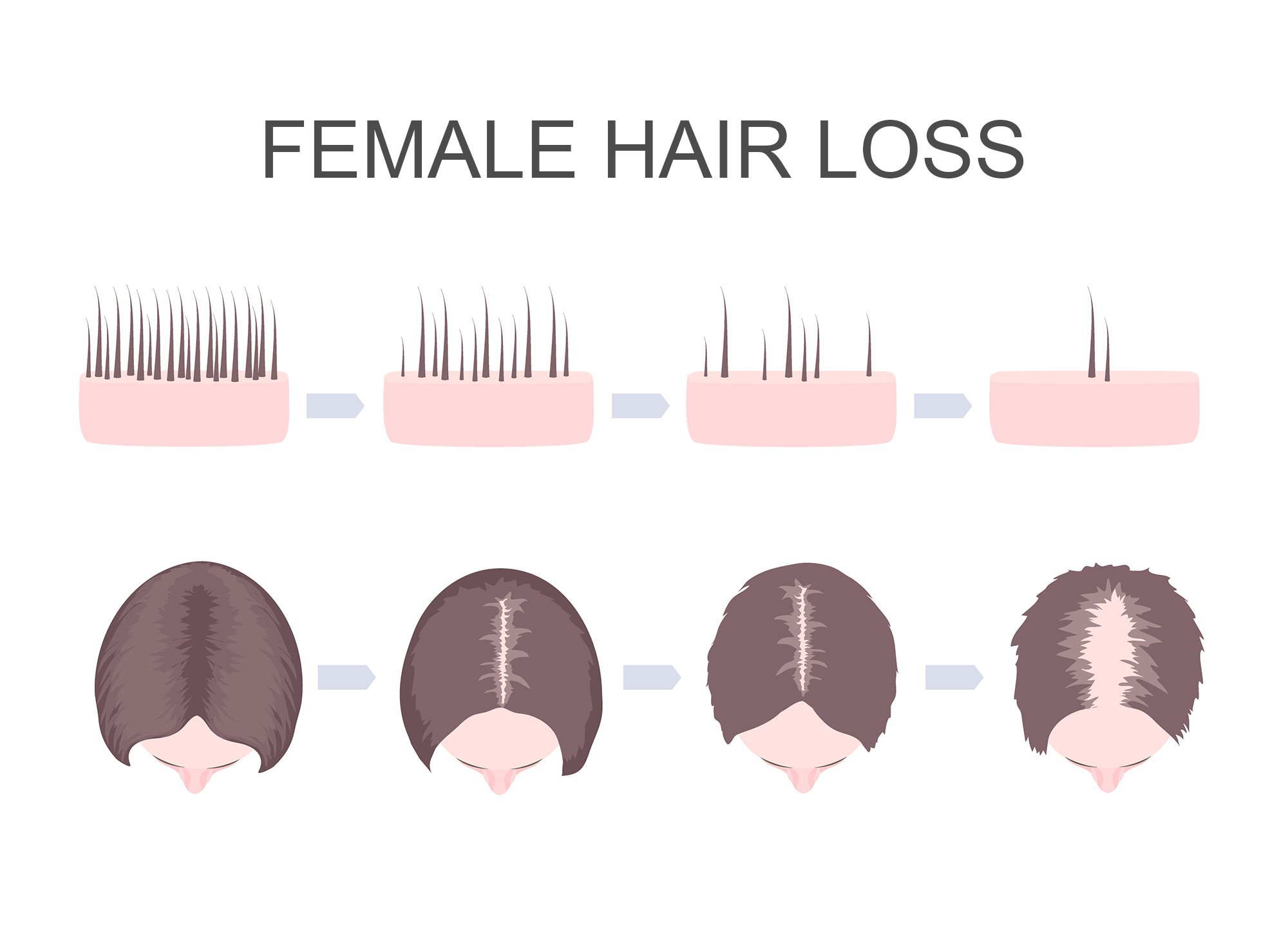 Why women lose their hair

Women can lose hair for a range of reasons. In pregnancy, changes in hormone levels can cause hair loss. Stress and anxiety can also cause hair follicles to cease production. In some cases, a vitamin deficiency can lead to hair loss. Certain medications can cause hair to fall out, too. But in all the aforementioned cases, the hair loss is a temporary condition for most people. Once the condition causing the hair loss ceases, either naturally or through intervention, the hair follicles will “wake up” and begin producing hair once again.

There are, however, two conditions in which hair loss in women is irreversible. The first is from a condition known as “alopecia universalis”. Very few people are afflicted with alopecia universalis, but those who are facing the devastating effects of all hair production ceasing on their entire body – they actually produce no hair at all, from their scalps to their toes. The condition is understood to be an autoimmune disease and there is no “cure” for it.

As stated above, the overwhelming majority of women suffer from what is known as androgenic hair loss caused by hormones. It was previously mentioned that pregnant women can experience hair loss due to changes in hormonal levels. With androgenic hair loss the principle is the same but the cause s quite different.

Testosterone can be found in a person’s scalp. If the hormone dose not break down properly as it ages and is ready to be disposed of as waste, a by-product known as dihidrotestosterone (DHT) exists. When too much DHT accumulates in the scalp, hair follicles are affected. They begin to atrophy. The hair being produced becomes smaller, weaker in structure, and lighter in color. Finally the hair follicle enters a permanent dormant state and no hair is produced at all. In most cases there is no way to induce the hair follicle to produce normal, healthy hair again. The hair follicle is essentially dead. 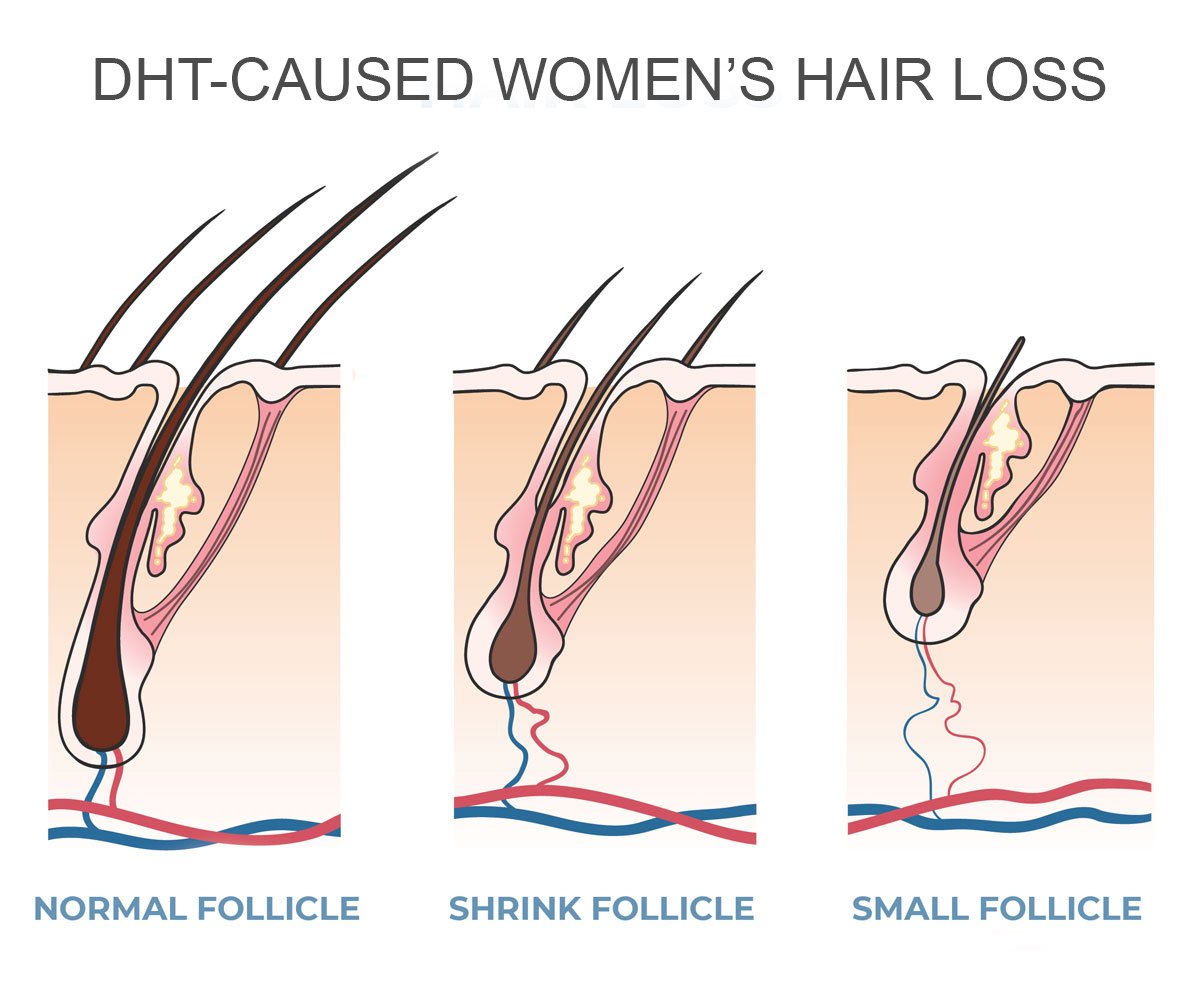 A common cause of hair loss in women – sadly – is adverse reactions to medical treatments, such as radiation and chemotherapy, used to combat cancer. Prescription medications are also known to have caused hair loss. These types of hair loss conditions, however, are usually reversible and not permanent.

Lastly, and notably, is hair loss caused by lifestyle choices. In spite of wives’ tales warning people that just about anything can cause hair to fall out – such as wearing hats – hair loss can occur by wearing too tight of buns, braids and ponytails. The hair loss condition caused by these behaviors is known as “traction alopecia” and is sometimes not reversible. There is much to be said for hair loss prevention.

As we’ve seen, there are many causes of hair loss conditions. The good news? Regardless of what hair loss condition you may be experiencing, we can restore your natural, youthful appearance. The first step is setting up a a free consultation and evaluation with one of our experts to ascertain why you’re losing your hair. Our skilled team can than determine an individualized treatment path you should follow for your own particular hair loss situation. Contact HairLine today.

Service and Expertise since 1970

Take it from us, when you’re in business for 50 years, you learn a few things about how to do things right.  At HairLine Hair Loss Treatment Clinics, we understand the importance of maintaining our youthful and natural appearance. When men and women lose their hair, it can adversely affect many parts of their lives. We never lose sight of the fact that our job is to make our clients look so naturally good that it causes them to feel good.

This understanding inspires us to provide the most friendly, patient and compassionate service while offering individualized hair loss solutions to men and women based on their own unique hair loss condition. If you’re encountering any sort of hair loss situation, put your trust in our more-than-capable hands and experience up close and personal what 50 years of premium service, creativity, ingenuity and innovation looks – and feels – like.