LEARN THE FACTS ABOUT ALOPECIA AREATA 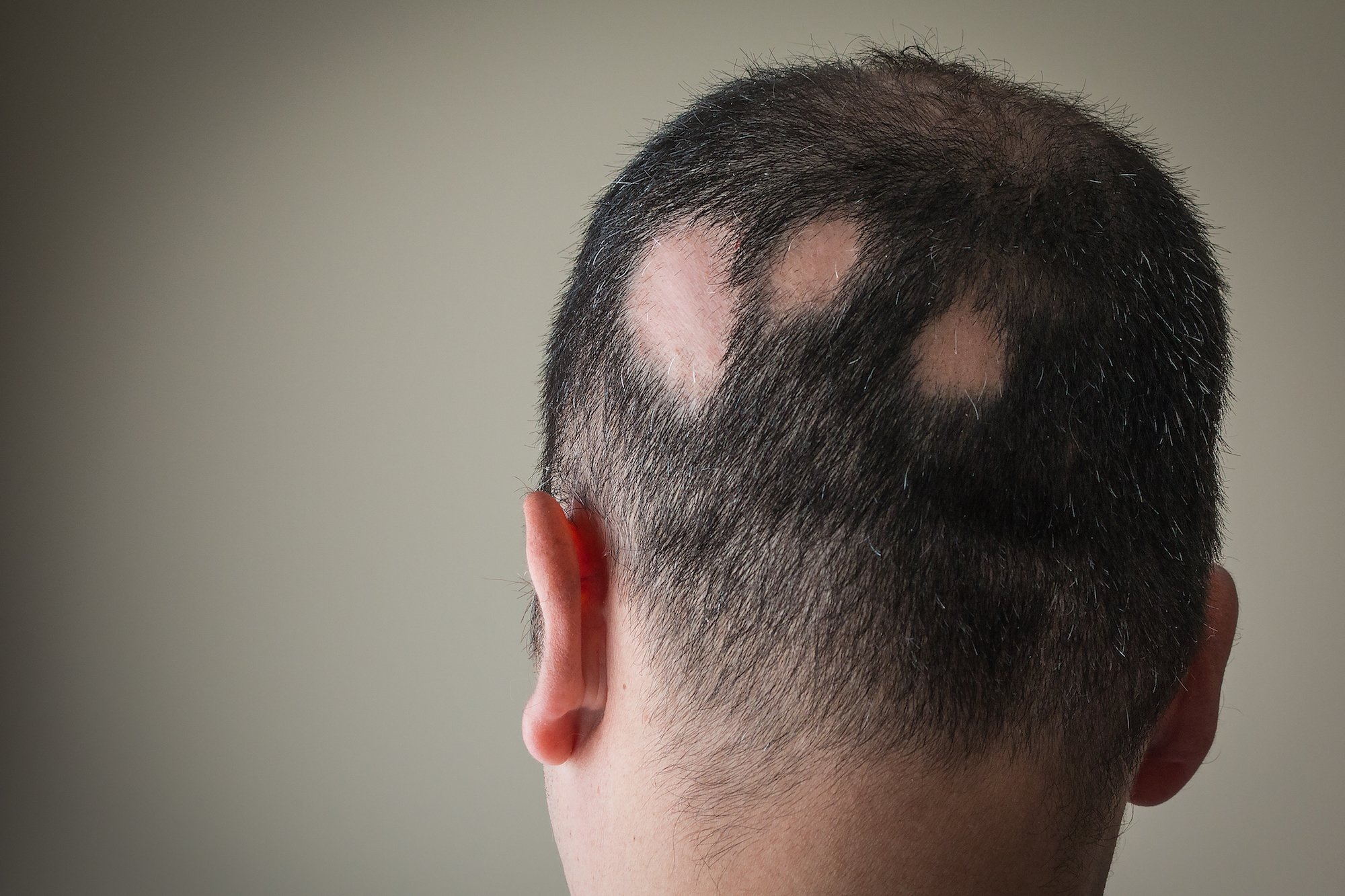 This form of irregular hair loss – on the scalp and sometimes elsewhere on the body – has incomplete understanding and treatment. But some can be reversed.

It might help anyone with a new diagnosis of alopecia areata to know they’re not alone. Approximately 5 million Americans suffer from the condition of patchy or complete hairloss that falls outside the definition of pattern baldness and, unfortunately, outside the effectiveness of most common hair loss treatments.

While it can take several forms – simple coin-size patches of hair loss in the scalp, complete loss of hair on the scalp (alopecia totalis), a total loss of hair on the head and body (alopecia universalis), and some combinations of the above to varying degrees – alopecia areata is believed to be caused by an autoimmune disorder. This occurs when the body’s immune system attacks a healthy body part (in this case, hair follicles) as it would a foreign and harmful invader (such as a virus). The cause is probably a combination of genetics and environmental factors, although variances between individuals make a definitive, scientifically valid finding elusive.

Alopecia areata is more psychologically damaging than physically disabling in most instances. Bare scalp and other areas need to be protected from the elements (sun, cold), but its aesthetic effect is what most patients seek to address.

What is known about alopecia areata is that it can sometimes be reversed. For some, it happens once and reverses itself. For others, it can become a permanent condition. The factors that are somewhat predictive of a positive outcome (less hair loss, reversal of alopecia areata) are adult (vs. childhood) onset of the condition; minimal loss in general; absence of changes to fingernails (associated with advanced cases); absence of strong family history; and absence of multiple autoimmune conditions. Simply having alopecia areata is not necessarily an indication of another, larger health challenge.

As one might expect, treatment for the condition varies by the type and extent of it, and by individuals. The good news is that while the hair follicles are attacked in a case of mistaken identity (that hair follicles are foreign invaders), so to speak, those follicles do not go away. They can be rejuvenated by time or treatment – not always, but often. Here are some options:

Medical topical treatments – While the common medical hair loss treatment Minoxidil will not be effective in the short term, some patients with mild alopecia areata experience regrowth if applied for a year or longer. It is available without a prescription. Surprisingly, an irritation of the affected skin areas with the use of Anthralin or diphencyprone can also work, however the effect may take many months to be realized, if at all. Corticosteroid creams decrease follicular inflammation and can work in some patients.

Medicines (taken internally) – As with most internally taken medications, there is always a risk of serious side effects (high blood pressure, kidney and liver damage, lymphoma). That said, cortisone and immunosuppressants have proven effective in some cases.

Medicine (injections) – Micro-injections of steroids in the affected areas, repeated every one to two months, have proven effective in some patients.

There is a great deal of interest in “natural” treatments for balancing the human immune system, which is off-balance in the case of alopecia areata. These include various teas, aromatherapy, probiotics, the application of essential oils and onion juice, and anti-inflammatory diets. None are tested by the FDA and none have clinical documentation of efficacy.

Suffice it to say that much more research and data need to be compiled to identify the specific causes and treatments for alopecia areata. With millions of people having some degree of it, expect that research will tell us more in the years ahead.